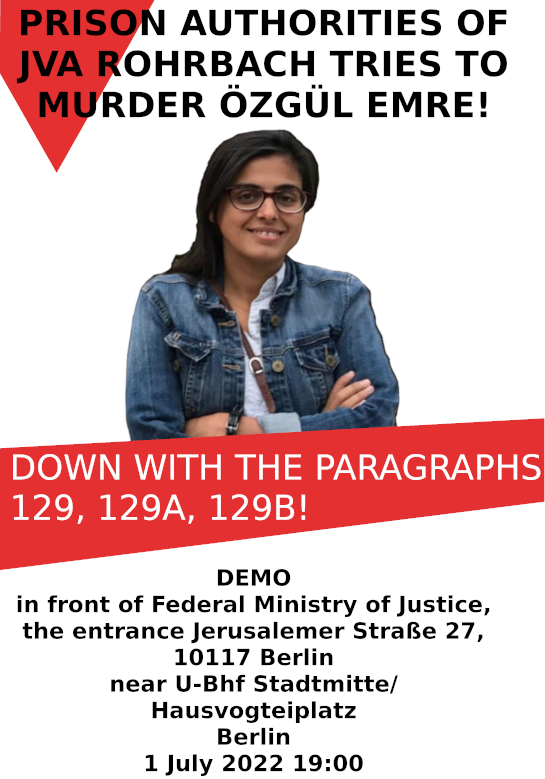 Rally – Solidarity with the prisoners on hunger strike – Away with the paragraphs 129, 129a and 129b!
We will be in streets, demanding justice for Özgül Emre in front of Federal Ministry of Justice
in front of the entrance Jerusalemer Straße 27, 10117 Berlin
near U-Bhf Stadtmitte/ Hausvogteiplatz
Berlin
1 July 2022 19:00
On 16th of May 2022, Revolutionary Journalist Özgül Emre was abducted by German police in Mannheim on daylight. Next day, police raided the house of İhsan Cibelik, a member of the revolutionary music band Grup Yorum. He was forcibly detained resulting in bruises and abrasions on his body. Both of them are taken to respective courts and in a fraction of second these courts decided on the arrest of them. Özgül Emre was taken to JVA Rohrbach prison and İhsan Cibelik was taken to JVA Köln-Ossendorf. 18th of May 2022, another anti-fascist, Serkan Küpeli, was detained in Hamburg.
The German state based these raids, detentions and arrests on the Article 129-b. Article 129-b of German law is specifically designed to suppress revolutionaries from Turkey and designate them as “terrorists”. Previously, in Stuttgart, 5 anti-fascists from Turkey were sentenced to years of prison time. Their crimes? Organizing Grup Yorum concerts, distributing magazines, organizing picnics, supporting resistance, continuing association activities… Thanks to German Imperialism, we learned that all of these activities are “terrorist” activities.
But the attacks of German state didn’t stopped there. From the detention onward, they forced prison uniforms on Özgül Emre in JVA Rohrbach. German state knows very well that Revolutionaries do NOT and NEVER wear prison uniforms. In 1984, 4 revolutionaries died as a result of hunger strike to oppose the introduction of prison uniforms in prisons of Turkey. Until this day, there is no prison uniforms thanks to 4 martyrs.
Özgül Emre comes from this uncompromising tradition to keep up the identity, integrity and dignity of being a revolutionary. From her detention onward she is on hunger strike, now for 36 days(21.06.2022). Her demand is to access to her own clothes.
As the oppression to enforce prison uniforms is not enough, JVA Rohrbach is tried to kill her with not supplying salt and sugar for the first 30 days of hunger strike. They only supplied one piece of sugar with tea every evening, which obviously is not enough. Without the supplements like salt and sugar in proper dose, it is very easy for a person die in hunger strike at any stage.
After 40 days, without supplements like B1, hunger strike begins to form a critical stage, where long lasting effects can take place. Around the day 60, it can be too late. A solid solidarity action is needed to put pressure to German state who thinks that, a revolutionary prisoners life can be negotiable.
Furthermore, we see this action as a prelude to a campaign against §§129ff, which are used explicitly against revolutionary organizing both in their origin and today.
Let’s show our solidarity with Özgül Emre and all fighting prisoners!*
We never wore prison uniforms and never will!
Being a revolutionary is not a crime, it is a duty!
We will be in streets, demanding justice for Özgül Emre in front of Federal Ministry of Justice
in front of the entrance Jerusalemer Straße 27, 10117 Berlin
near U-Bhf Stadtmitte/ Hausvogteiplatz
Berlin
1 July 2022 19:00
*Following the rally, there will be a demonstration in solidarity with Giannis Michailidis, an anarchist prisoner imprisoned in Greece and resisting and fighting for his release with a hunger strike since May 23, 2022. (Insert link to the call if available). 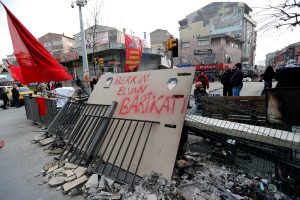